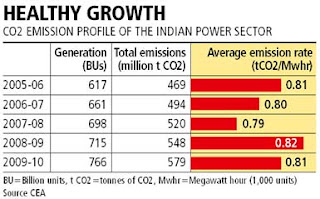 The government has a reason to smile. The rate at which Indian power plants are pumping carbon dioxide into the atmosphere, which had been rising sharply, has receded to 2005-06 levels. This seems to indicate the pro-environment policy agenda devised after the commitment at the Copenhagen ecology meet of reducing emission intensity by 25 per cent by 2025 has started bearing fruit.
The latest emission figures, published annually by the Central Electricity Authority (CEA), reveal that power plants in India emitted 0.81 tonnes of CO2 for every MWhr (1,000 units) of electricity generated in 2009-10, similar to what was recorded five years before (see table).CO2 is a major greenhouse gas and alone contributes to 60 per cent of overall global warming. Coal-based power generation plants account for a major chunk — a little over 60 per cent — of all carbon emissions from India. The country’s power plants emit 570 million tonnes (mt) of CO2 annually.proposed a 20-25 per cent cut in its emission intensity by 2025 and the government has plans to invest Rs 74,000 crore within the next five years to cut carbon emissions from its power sector.
This investment is being directed at measures to cut energy intensity of the domestic economy, including increasing the efficiency of power plants and introduction of clean coal technologies. These would result in the reduction of 98.5 mt of CO2 over the entire period, according to the findings of the Bureau of Energy Efficiency under the ministry of power.
Nuclear switch helped
“The main reason why the energy intensity of the power sector has improved recently is the higher generation from gas-based power plants, which are showing better Plant Load Factor. Also, nuclear power generation has picked up due to better fuel availability now. These are clean sources,” said Union power secretary P Uma Shankar.
Improved fuel availability for nuclear power plants at the back of fresh uranium imports helped push up nuclear power generation by 27 per cent to 18,653 million units (MUs) in 2009-10. Since the India-specific waiver for nuclear commerce from the 45-member Nuclear Suppliers’ Group (NSG) in September 2008, the country has brought in uranium from France, Russia and Kazakhstan, the three countries with whom we have import agreements, to power atomic generation.
Similarly, gas-based power generation jumped 25 per cent to 155,676 MUs in 2009-10, owing to increased availability of gas from the KG Basin.
Better data needed
Experts, however, believe the government needs to finetune the data to capture emission trends from specific fuel sources to make it more reliable. “This data gives the emission profile of the entire energy mix, without focusing on individual fuel type. It also misses out on future forecasts when the power market opens up. It is possible that while the PLF of plants has improved, low coal quality led to increased emissions. But this would not be captured in the emission data of the overall energy mix,” said Kuljit Singh, Partner, Ernst & Young.
The Indian economy is one of the least energy-intensive globally. The energy-GDP elasticity index for the country, a measure of the increase in energy demand required for every one per cent increase in GDP, has come down to 0.8 currently, as compared to over 1 in the early 1990s, according to the Planning Commission.
While India’s per capita greenhouse gas emissions at 1.02 tonnes are well below the world average of 4.25 tonnes, the bulk of its power generation comes from coal-based stations. Another issue in cutting future emissions is the low efficiency of older plants. Currently, over 5,000 Mw of power capacity in India has low capacity utilisation of less than five per cent.
Posted by H.S.BAGGA at 3/16/2011 08:39:00 PM