Deja vu in the power sector

From a sector that was deemed one of the most promising as late as a year ago, the electricity sector‘s financials have worsened rapidly. For generators, the immediate reasons have been a quagmire of disrupted fuel linkages, coal and natural gas, land issues, equipment shortages, and lately increased borrowing costs. Capex data from CMIE indicate a sharp increase in abandoned projects. These problems have been progressively aggravated by the worsening financial condition of state electricity distribution utilities (discoms).
Although the situation is not as bad as in the early 2000s, which had necessitated the one-time settlement (OTS) scheme, there are enough parallels to have caused the establishment of two high level committees (Shunglu and Chaturvedi) to look into the causes and suggest structural reform measures to prevent a recurrence. There have been no outright defaults this time, but enough irregularities in payments from the discoms. However, the magnitude of the problem is approaching that of the earlier crisis, and has been building up since 2005-06, after having improved since the implementation of the OTS scheme.
First, a description of the losses, since the figures in the media vary widely. The bottom line of the discoms’ financials are the operating losses. As of FY10, the last year a compilation of discoms finances are available, these losses had increased to R63,548 crore, up almost 2.5 times from R27,000 crore in 2006-07. While energy sold had increased at a compound annual growth rate (CAGR) of 9% over this period, losses (without the subsidy component) had risen at a 33% CAGR and with subsidies realised, a staggering 89%. Subsidies actually received rose just 3%.
The subsidies story is important, however. Discoms are mandated to supply power to consumers (agriculture and domestic households) at rates which are lower than the cost of supply. To the extent that this is a social objective embedded in the supply of electricity, this should be compensated through subsidies. Net of subsidies actually received, rather being just booked by the utilities, these losses rose to R44,000 crore, up from R14,000 crore in 2007. The sharp increase in the gap between these two reported loss categories are the subsidies paid, which as pointed out above, rose just 3%.
In addition to these accumulated losses (which increased by R88,000 crore over March 2005 to March 2010), the Shunglu Committee points to an even more disturbing statistic—an increase in current assets of R94,000 crore. Quoting verbatim, “this last figure is highly opaque and not clear as to what are the contents which aggregate to this … inevitably, these represent nothing but losses not shown in the annual accounts”.
Two large components of this increase are “sundry debtors” and “other current assets”, which together account for an increase of R81,000 crore. Some part of this, of course, subsidies not paid, which would reflect an overlap with the total accumulated losses, but an additional component is the “receivables”, which rose from R31,000 crore to R56,000 crore. The collection period (for individual states) was 36 to 645 days. The longer the period of arrears, the worse the financial health of the utility. This, in addition, shows in very poor light the collection efficiency figures of 94% (in 2007) that are reported by utilities (according to the Central Electricity Authority).
To bridge these losses and continue system operations, utilities have resorted to borrowing from banks and financial institutions. Matching the sharp deterioration of losses in FY10, discoms’ debt had increased 27% in FY10 to R3.1 lakh crore, up from R2.5 lakh crore the previous year. The result of this is that the net wealth of utilities has been virtually eroded. For the system as a whole, net worth at end-March 2010 had fallen to less than R12,000 crore, down from close to R90,000 crore at end-March 2008.
The bright spot in this is that the deterioration is caused by a handful of states. As much as 85% of the deterioration in system losses (and 74% of losses pre-subsidy) was due to just six states. Other than the bills receivable, the losses can be attributed largely to two characteristics. One, the inability or unwillingness of discoms to raise consumer tariffs, to match the increase in power generation or procurement costs. Two, an inability to reduce system losses {which are now called aggregate technical and commercial (AT&C) losses}, a combination of transmission losses and theft.
The cost discrepancy first. While the average cost of supply rose from R2.76 per unit in 2006-07 to R3.54 (i.e. 78 paise), the average revenue realised increased just 35 paise, to R2.68 per unit (529 million units were sold in 2009-10). Again, this discrepancy varies widely across states. Part of the discrepancy is due to the cross-subsidisation to agriculture and domestic consumers, part of which is supposed to be covered by the government subsidies. 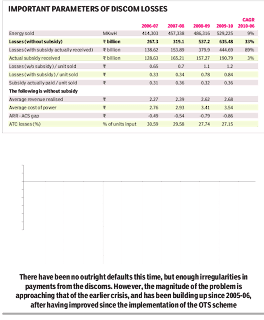 But even this could have been manageable, had discoms not had persisting high AT&C losses, 27.2% in FY10. Even this, according to the Shunglu Committee report (which pegs this at 30%), does not include other operational losses (for example, over statement of agricultural consumption). After having dropped sharply from 36% in FY05 to around 31% of total power procured by FY07, losses have bottomed at 27% in FY10 and reportedly persists there.
So what needs to be done to remedy the situation? The Shunglu Committee has suggested a framework that aims to impart some commercial discipline to discom operations. This is not the place to explain this. Suffice it to say that it sounds very similar to the OTS scheme of 2001, with an SPV to take over the bad loans of discoms as the innovation.
Will this avert an aggravation of losses in the future? There are some encouraging signs. At least two of the largest loss-making states have filed (or are in the process of filing) tariff increase proposals before their respective regulators. In addition, state discoms are increasingly looking at franchising (through auctions) concentrated, high load consumer pockets to private power companies. The experience of the Bhiwandi (Maharashtra) franchise has been very encouraging; more franchises have been awarded in Kanpur and Agra. However, it is amply clear that barring a more commercial orientation of these utilities, there is unlikely to be a sustained improvement in their operations and finances.
Posted by H.S.BAGGA at 1/03/2012 01:09:00 AM