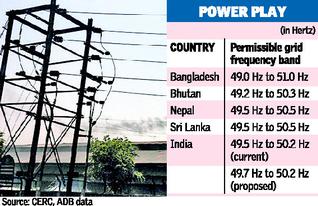 A new proposal floated by the apex electricity regulator could offer a fresh impetus to electricity flows from South Asian countries into the Indian grid and vice versa.
The draft regulation, which aims to tighten the frequency range at which the Indian electricity grid system currently operates, is expected to sufficiently address the reluctance shown by neighbouring countries to synchronise or hook up with the Indian grid.
The Central Electricity Regulatory Commission has proposed a tightening of the lower frequency band to 49.7 Hertz (Hz), from the 49.5 Hz lower limit applicable currently. Under this, any deviations below 49.7 Hz will be effectively discouraged under the ‘UI' mechanism, or the grid-frequency linked price-balancing scheme.
“Earlier, countries in the region have shown a reluctance to synchronise with India citing wayward frequency patterns and flagrant violations of the norms by constituents here. With the tightening of the norms, India would have the narrowest frequency band among all South Asian countries,” a Government official involved in the exercise said.
The idea of regional grid interconnections is aimed at ensuring power flows from countries such as Bhutan, which has an exportable surplus, and Nepal, which is aggressively developing its hydro resources, to deficit nations such as India, Bangladesh and Sri Lanka.
In the medium term, a SAARC Market for Electricity has been proposed, which envisages trading across member states on the market platforms that are already in place in India, including over the two operational power exchanges.
While a transmission link with Bhutan is already in place, there are plans to spruce up the existing line to enable up to 5,000 MW of electricity imports into India by 2020. In Nepal, a proposal aimed at increasing power sharing through stronger transmission links is afoot.
With Sri Lanka, plans are already under way for setting up a $450-million undersea power transmission link while a cross border link with Bangladesh is also in the works.
Posted by H.S.BAGGA at 9/06/2011 12:44:00 PM